For the purpose of establishing a Town on the Marietta & North Georgia Railroad in Pickens County, Georgia, to be designated and known as the Town of Talking Rock, the undersigned owners of lands in Lots 132 and 157, in the 12th District, 2nd Section, first reserving the right of way and lands contiguous to the railroad track, which lands we have this day conveyed to the Marietta & North Georgia Railroad Company in deed bearing even date with this instrument, and as appears on this map prepared by F.S. Wallace, Chief Engineer of said Railroad Company, which map is drawn on the tracing-cloth which this instrument is written; and first again hereby dedicating to the public forever for street purposes so much of said lands as is embraced in the various roads, streets and even as shown on said map, do hereby set apart so much of our said land as is embraced in the various lots and blocks show on said map, to be hereafter known as designated by number of lot and letter of block, with metes and bounds as shown by said map, said lots, blocks, roads, streets and avenues to compromise the Town of Talking Rock; the consideration moving each of us in the establishing of this Town being the consequent enhanced value of our lands within and adjacent to said Town, and the general benefit to the surrounding country, by which we shall be benefitted. It is our wish that the Town of Talking Rock be incorporated according to the Laws of Georgia, with such regulations as the purchasers and holders of the lots may determine to be best, and that the streets and avenues become the property of the Town for the purpose designated.

In witness whereof we have hereunto signed our names and affixed our seals this 19th day of March, A.D. 1883. 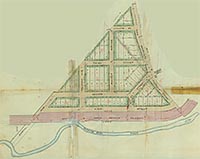 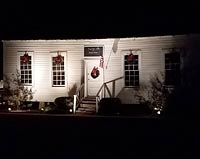 Heritage Days Festival is held on the third full weekend in October and is the highlight of the year in Talking Rock. Vendors from around the state join with shop owners for a 2-day festival, that includes food, fun and music.
Admission and parking are free!